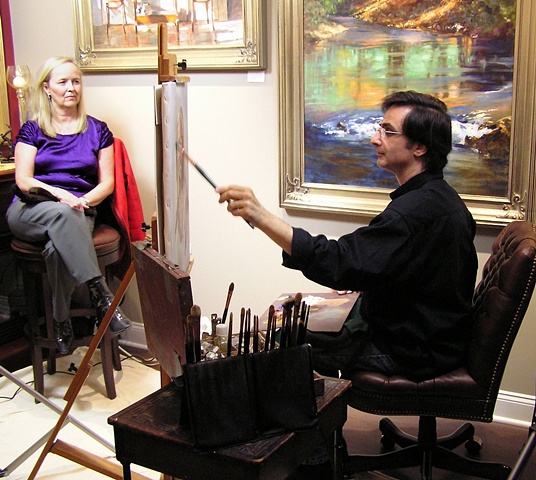 Alfred Colella is a contemporary painter born and living in New York City. Although his work includes all genres, he has always been fascinated with the human face and figure, while using the lush and sensual qualities of oil paint to capture and express the feelings and life force within the form. As a child his natural ability to draw people resulted in many prizes for his innate talent. As his deep love and passion for art unfolded in childhood, Alfred decided to pursue his higher education at New York’s prestigious Pratt Institute, from which he received his undergraduate degree, and where he was fortunate to study closely with an award winning faculty, including Audrey Flack, who cultivated his emerging studio practice, which continues to this day. He went on to study at The Art Students League which is proud to have him as a member and where, for several years, has been a teaching assistant with Mary Beth McKenzie, a renowned artist whose own works are on display at The Metropolitan Museum of Art. During his tenure at the League, he has also studied with Richard Pionk, Leonid Gervitz, Gregg Kreutz, Joseph Peller and Sharon Sprung. And when not working at the League, Alfred teaches privately. Alfred’s work has been showcased in juried exhibitions in New York and he has done demos at numerous galleries. He has produced works that were showcased in New York at the Ogilvy and Mather Portrait Exhibition, the Weill Cornell Medical Library, the Genstler Portrait Exhibition, and the Gallery at Marquet. Furthermore, he is a multi-year winner of the Art Students League Red Dot Award. Private collections in New York, California, Massachusetts, Pennsylvania, Arizona, Illinois, North Carolina, and England hold a number of his works.